There once lived an old and passionate forager, who hunted mushrooms in his local woodland.

In truth, most of his bounty often ended up in the bellies of his friends – because like him, they loved mushrooms very much, and for the scavenger the task itself was what was truly to be enjoyed.

Immersing himself in nature by taking a quiet stroll in the woods provided peace and comfort in the way trees only can, for to the hunter, these truly were magical places.

The man had always gone against the grain in many ways; for his entire life he had refused the notion that his purpose was to undertake mundane tasks for which he cared little. The thought of a daily cycle of monotonous work terrified him, so he endeavoured to make his living in other ways.

Old now, and thinking himself not long for this world, he tried to enjoy his simple life as much as possible, often taking pause to dwell on the beauty, tranquility and unpredictability of his environment. He studied with a keen and playful curiosity, longing to discover the hidden secrets of the forest. 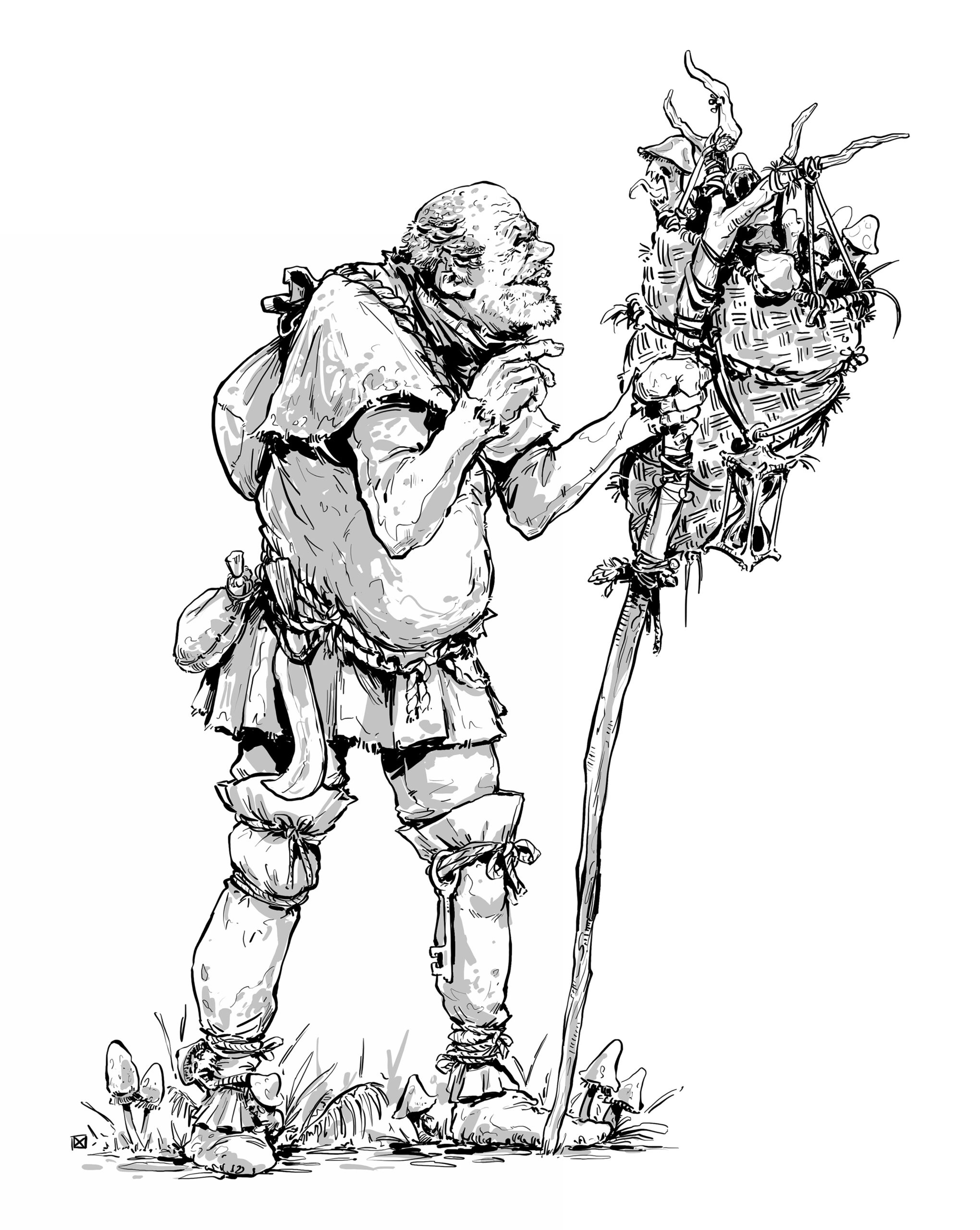 He had always held a deep conviction that these secrets were plenty, and that they hovered agonisingly out of his reach… Gnomes, Kobolds, Sylphs, Fairies; they were all out there… he just needed to know how to look! The ephemeral signs would flash in and out of his vision while he walked… but so far he had not been able to discover true evidence of the hidden world.

His respectful approach to the forest over a number of years had bought him favour with the Spider People, something which was not easily afforded. He cherished this connection, and believed that they could potentially help in his search for fairies.

However, the Fairy People continued to elude him, and despite brimming with youthful exuberance and determination, his mind and body were no longer what they used to be, and his lively disposition belied his years.

To make things worse, he felt his mind could no longer be trusted. He was sure he had begun to hallucinate, which was never a welcome sign. During his daily walks, the mushrooms seemed to mock him and his continuous search for the impossible. Reaching down to pluck them from the warm earth, they would bite at his fingers, wail complaints of his wanton destruction, and whisper sharp profanities as he carried them home.

These ‘unusual’ occurances became more frequent – he began to see stones covered in tiny eyes, was bristled by ferns that stretched out to swat at his face, and stumbled over roots which danced underfoot, trying to trip him up.

He was going mad – surely?

It was the mushrooms which finally broke his mind. Their constant chattering, gnawing at his fingertips, chewing through his satchel – there was no mistaking it, everything was truly alive!

Each of his interactions was unique, as every singular object had it’s own distinct personality. There were as many shy, good-natured leaves as ones which lashed out to cut him; as many open flowers as there were poisonous barbs… It was a revelation! Even his trusty pruning knife and wicker basket now responded differently to his touch, and he often caught them examining him with keen interest!

He was overwhelmed with joy: for so many years the fairy world had been just out of reach, but finally he had discovered it; that which he had always hoped was proven true, and others had to be told.

Magic was alive, and it was everywhere! Mad with joy, he rushed off to share glad tidings.

It took Grandma Longlegs quite a while to calm her friend down, but eventually she managed to piece together the forager’s incoherent, rambling story. She was old, wise… and incredulous. Something strange was afoot, and she prudently suggested he report his findings to the People of the Woods; surely they would know what to do with his ‘discovery’ – if they did not know of it already.

So that is what the old man did. Among those people he found new friends not only able to understand his story, but share in his enthusiasm for the natural world. He delighted in their company, and they in his.

They did withhold one piece of the puzzle from him however, as no one truly had the heart to share it with him. All of the tiny, magical happenings of his story did not manifest themselves, it was he, the old man, who was the source of their animation.

The Infection was running wild in his body, and even though no visible sign of it was on the outside, deep within the man the all-powerful desire to live a fairy life was strong enough to latch onto. As a result his mind had transcended, and he was blessed with the immeasurable power to breathe life.

The People of the Woods all agreed that keeping the Mycophile in the dark about this minor detail was the kindest thing they could do for him – for what better thing can there be to see your dreams come true before your eyes? To feel vindication after years of doubt and toil? To find that which for so many years, you have sought?

And so, to date we don’t know the real extent of his gift. The Mycophile gleefully resides in the woods, delving through the endless magical adventures that seem to await behind every single stone, leaf and tree.