Many years ago, a young and beautiful noblewoman was forced to marry a man against her will. At the time, arranged marriages were commonplace – a mechanism used by powerful families to reinforce political and economic alliances. Marriages of convenience or necessity, but never of love.

From the very first day, her wedding was an unhappy one – devoid of any emotional connection, care or consideration, she felt unwanted. Despite being both young and beautiful, her husband did not desire her.

He certainly had eyes for other women however, and took pleasure in the company of the numerous concubines the city had to offer – much to the noblewoman’s shame.

For within her was a passionate spirit, a spark of vibrant energy constantly supressed by tradition. Delights of the flesh were often afforded to young men of the time, but for a woman to partake in any such activity would result in scandal. She yearned for the attention and affection of others, but was denied a way to placate her desires.

She could only reminisce of what she had now lost – the years of her youth when she enjoyed the company of men, perhaps not always up to her social standing, but at least able to reciprocate her passion. It was during this time, when she was able to explore the boundaries of carnal pleasure, to feel the comfort and care of her partners, to feel appreciated and whole, that she saw glimpses of what love could truly be. 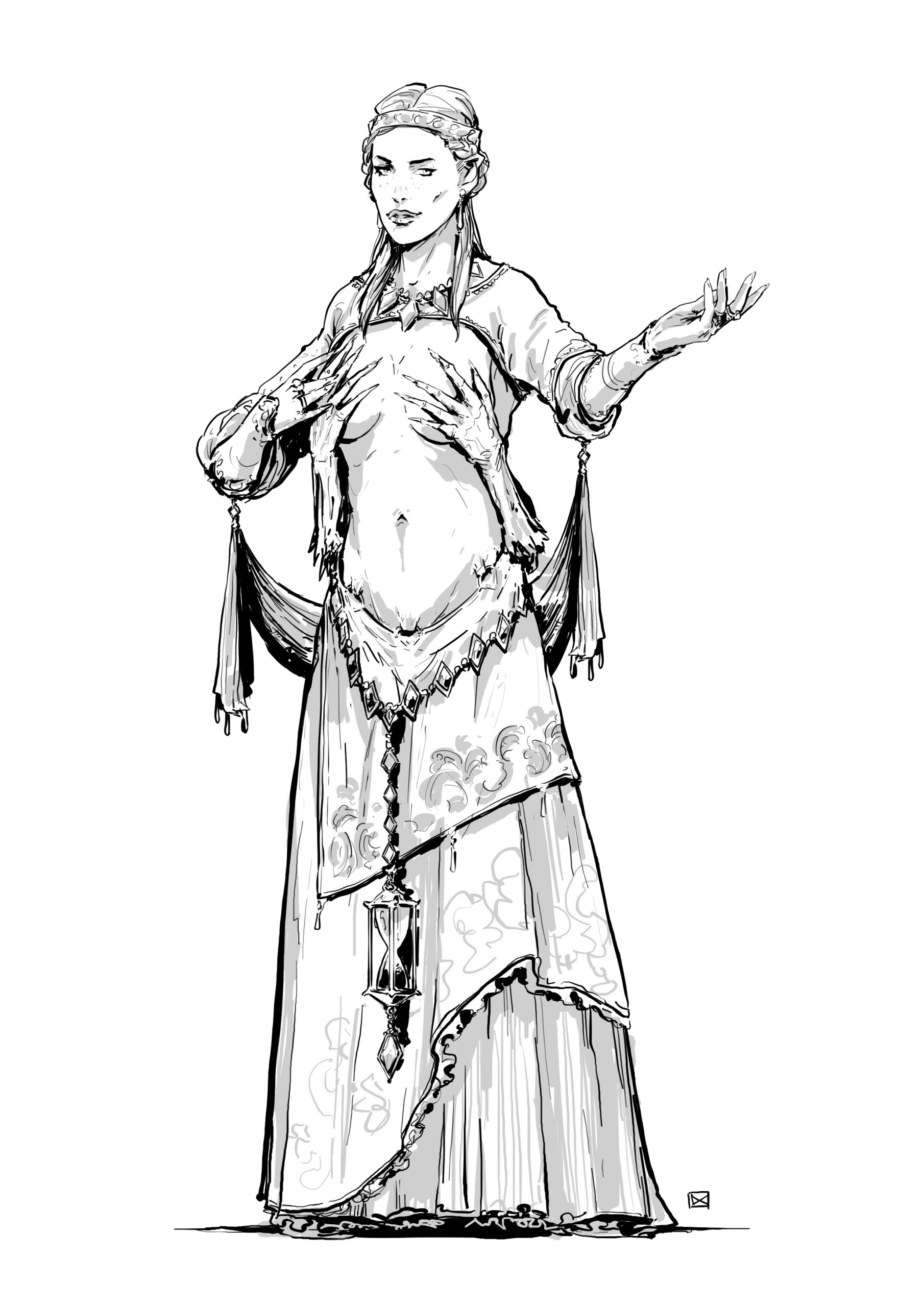 These were only memories however… and memories do not keep us warm on cold winter nights.

The years slipped by slowly. Her routines became monotonous and her behaviour dull and predictable – as the patriarchy preferred. When her husband eventually died, she found herself frail, old and completely alone. Her vast estate a daily reminder that she had only ever lived in a golden cage.

She began to have strange recurring dreams, in which she saw herself young and beautiful again. Crystallised moments of her adventurous youth would spiral in her head, flashing briefly, drawing her in, tempting her to let go. There was always something odd about each setting, small distortions of minor details that made everything slightly amiss.
These memories weren’t quite correct, and certainly not true to her experiences, so the taste they left in her mouth as she awoke each morning was bittersweet. They also had a strong psychological impact on her.

Most absurdly however, was that night after night, upon completion of another disturbing dream, her physical appearance was actually changing. Her spine straightened, shoulders relaxed, neck elongated. Her skin tightened, no longer a loose pallid grey, but creamy white, with a taught, firm, smooth glow. Her breasts flourished, her eyes, no longer sunken holes, formed bright sparkles within a once-more beautiful face – a face that would stop any man in their tracks.

It was clear to everyone that in place of the old lady there was now a young girl, but nobody dared speak openly about the matter for fear of the consequences.

Along with her physical rejuvenation, the lady rediscovered the strong sexual drive she was unable to satiate during her marriage. She decided she would make up for lost time, and had no qualms in laying with several men of the castle, almost immediately.

This brought about inconvenient consequences for the lady of the house. After serving her purpose, men would often lapse into a catatonic state for a number of days, seemingly drained of the ability to function by the passionate experience.
Many died as a result. Those that did not, were shadows of their former selves – memories blank and eyes distant, they were empty shells devoid of purpose. For what purpose can there be in life, when you have already tasted the zeniths of pleasure, and nothing in your future will ever compare?

After enjoying a period of initial intoxication, the woman took pause and realized that she was perhaps a new victim of the infamous Infection – a dangerous disease that was rumoured to be sweeping across the Empire. It’s origins unknown, it was said to be a blessing and a curse, manifesting unnatural change in its hosts.

By now it was too late for her to counteract the Infection. Her biological transformation was complete and she had become a superhuman creature with a very particular, insatiable appetite for young men. She needed their attention, their lust, their embrace, and their carnal pleasure to survive.

She became adept at using her unnatural charm to take, use, and devour them.

Sinister rumors began to spread inside the castle. Male servants of the house were dissappearing regularly, and people were beginning to question why. There were whispers of witchcraft, and a deal with the devil to sacrifice young men in return for eternal beauty…

The woman could not remain with the threat of a growing mob. Knowledge of the Infection was known in some quarters, but ordinary townsfolk preferred their traditional folklore. If she was to stay, her life would end at the tip of a sword or on the flames of a pyre.

So she left her estate in the dead of night one evening, venturing out as an Entropic Being into the open world, where she continued to tempt young men to their doom.

The blessing of the Infection, her youthful looks, only belied the curse within. After years of neglect, the woman still yearned for the appreciation, connection, safety and true love of another man.
Previously she was unable to seek it, denied its full measure by unfortunate circumstance. Now, she was the most desirable lady of the age and free to do as she wished – but the true love that she dreamed of, that she truly longed for, remained cruelly out of reach… she would often see it flicker, dampen and vanish in the cold dead eyes of her lovers, as she consumed them, one by one, forever more.